In the mid-1980s, community foundations were becoming more numerous in Michigan, fueled by a matching fundraising program launched by the Kellogg Foundation. The long-range planning committee of the Capital Area United Way felt the time was right to establish a community foundation in the capital region. If the United Way was the community’s charitable checking account, it seemed natural to establish a charitable savings account.

In October 1987, the Capital Region Community Foundation was formally incorporated. The original board was made up of Capital Area United Way committee members and community leaders.

The plan was to merge the Community Foundation with the Greater Lansing Foundation, which was established in 1947; however, after considerable deliberation, the Greater Lansing Foundation board ultimately declined the merger proposal. So the fledgling new foundation started out with no operating funds, only the vision of its founders, who spent the early years emphasizing the raising of money for operations and the establishment of a few funds that would enable them to make some grants.

Mary Olson was hired in 1990 as the foundation’s first paid staff member. She said she recalls Bob Berning, the United Way’s executive director, handing her a box of papers and saying, “Here’s the community foundation.” Mary set up office space in the former coffee break room of the United Way’s downtown Lansing offices, and the foundation’s operating funds came primarily from grants from CAUW and the Gannett Foundation.

Mary and the board set to work on fundraising, focusing particularly on meeting the terms of a $1 million matching grant offered by the Kellogg Foundation, which matched $1 for every $2 the foundation raised in unrestricted or broad field of interest gifts. The Kellogg money was used to establish the foundation’s youth fund, which would not only provide grants for community youth programs, but would also support a Youth Advisory Committee that would involve local youth in philanthropy.

In 1990 the Community Foundation had six endowment funds, and by the end of 1991 the total had grown to 14, with more than a half million dollars in assets. As the foundation’s assets and grantmaking grew, so did its influence. The 1994 annual report proudly noted foundation representatives sat on various community committees that addressed a broad range of issues vital to our community’s growth and development. The foundation also advocated for youth to be included in community decision-making regarding youth concerns.

In 1995 the Eaton County Community Foundation was established as a geographic field of interest fund to serve the residents of Eaton County, and the Lansing Fund was established to accept gifts that would benefit the city of Lansing. A key project of the Lansing Fund was the “Buy a Brick” program for the then-new Oldsmobile Park; it raised $250,000.

Our 10th year of existence, 1997, represented great growth for the foundation, with assets climbing to $9.6 million. We also added to the foundation’s staff a finance officer and a program officer to handle grantmaking.

In 1998, the foundation received its largest gift thus far, a $4.3 million check from the Greater Lansing Foundation. It was also the first year we distributed more than $1 million in grants.

In 2000, our Community Foundation was selected as the community foundation that would hold the Connect Michigan Alliance Fund, established with a $10 million grant from the state of Michigan that would have to be matched with private donations. The fund supports volunteerism throughout the state and distributions are now made to the Michigan Nonprofit Association for that purpose. This fund really put our Community Foundation on the map, since gifts came from a large number of leading businesses, foundations and community organizations.

In 2001 the HOPE Scholarship Fund was established for the purpose of providing at-risk students in the Lansing School District with textbooks and two years of college tuition at Lansing Community College. The campaign to raise a $2.5 million endowment for that purpose — which was spearheaded by members of the Lansing Rotary Club, including then-Lansing Police Chief Mark Alley (whose idea the program was) and Bob Kolt — brought a great deal of visibility to the foundation. The fund wound up raising $3.3 million.

Pattie Reynolds resigned from the foundation at the end of 2002, and Dennis Fliehman became the foundation president shortly thereafter. The foundation staff had grown by this time to four, and it held assets exceeding $32 million.

In 2005 we received the largest gift from an individual to date: a $5.5 million bequest from the estate of Dorothy Francis. Because the gift was unrestricted, it greatly enhanced our ability to flexibly meet the community’s greatest needs.

In 2006, under board chair David Donovan’s leadership, we began a two-year strategic planning process. After reading a white paper entitled, “On the Brink of New Promise: The Future of U.S. Community Foundations,” the board was persuaded that in order to thrive, the foundation had to be more than a mere “charitable bank,” simply processing gifts and grants. Instead, it needed to take a strong leadership role in the community, using its influence as well as its money to address community issues in a positive, impactful way.

At the end of the process, the board proactively decided to invest in two key areas of concern: economic development and youth programs. We supported economic development efforts by joining with community businesses, governmental units and other civic institutions to form the Lansing Economic Area Partnership, or LEAP, Inc.

And we collaborated with a number of community partners — including Capital Area United Way, the R.E. Olds Foundation, Michigan State University, the Consumers Energy Foundation and the Ingham Great Start Collaborative — on a multi-year initiative to improve local school readiness through early childhood intervention and prevention.

This 0-5 initiative marked a real turning point for the foundation, as it was the first major effort to collaborate with a wide variety of funders and nonprofit providers to address a major community issue. From this point on, the community foundation’s visibility and reputation for community leadership improved dramatically.

In 2008, the financial markets crashed, and while we fared better than most, we still lost 25 percent of the value of our endowments. On the plus side, we received an unexpected (and unrestricted) bequest from the estate of Cleon Mingus, a GM line worker who had no children and no surviving family members. His professional advisor recommended he consider leaving something to the Community Foundation, and he decided to leave us his entire estate, valued at more than $500,000.

The financial markets were good to us in 2009, and the foundation increased the size of its impact grant to $75,000, with the goal of making a significant difference with a single program or initiative. The first recipient of the now-annual award was the Listening Ear, a crisis intervention center, which used the grant to purchase its own building to create a sexual assault response center.

In 2010, we added a director of communications, bringing our staff size to six full-time and one part-time employee.

We experienced a big, physical change in 2011, as we moved into the renovated Marshall Street Armory, where we are now part of the Nonprofit Center at the Armory, a collective of six nonprofits working to improve our community and our state.

In 2012, we restructured our staff responsibilities in order to increase our focus on donor relations and development. In 2014, we added the position of chief operating officer. Our staff is now comprised of six full-time and two part-time employees.

So here we are in 2017; our assets currently stand at over $90 million, and our grantmaking at more than $3.8 million annually. We have more than 400 named funds. Since we began making grants in 1990, we have distributed more than $44 million. 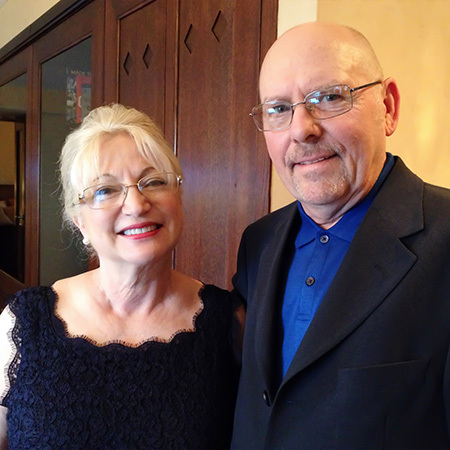 The Community Foundation doesn't sell a particular charity. It caters to donors. What's your dream? They can make that happen. It's more stable and secure than any one nonprofit.